The Non-Directive-Interventional method of healing and animation, inspired by the French psychologist and psychotherapist Michel Lobrot, and it has its roots in Kurt Lewin’s theory on the dynamics of groups, as well as on person-centered therapy by Carl Rogers. The attitude of the therapist in this method is based on the unconditional acceptance of the person and the group, the active listening, the empathy and the authenticity (Carl Rogers), and also on the possibility of intervening through the proposals. The proposals are designed to facilitate the deepening and enrichment of personal experience towards the emergence and realization of human desires (Michel Lobrot).

Michel Lobrot is a French professor of psychology at Paris VIII, a psycho-sociologist and a psychotherapist. He has written many books on the method and on psychology in general, such as «L’ecoute du desir”, 1992, “Non Directive_intervenante animation de groups”, “Vivre Ensemble-L’attitude non-directive-intervenante”, “Le psychisme en movement”, 2016.

It is a method of psychotherapy and group animation which, apart from the therapeutic field, can also be implemented in education and in any work and social environment that consists of small or big groups. 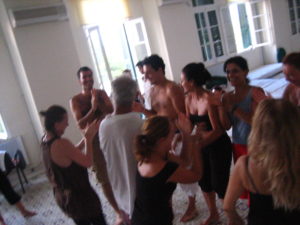 A basic principle of this method is that people can overcome their problems and alter their pathological behaviours when they are able to express their inner world as a whole. In particular, the basis of this method is the identification of people’s desires and the activation of all the powers which aims at the satisfaction of these desires. The therapeutic framework gradually cultivates the sense of trust, which leads people to truly express their inner world. At the same time, the existence of many different suggestions throughout the therapy gives people the freedom to try and, through this trial, to discover their desires.

People truly express their inner world and discover their desires at their own pace, since each person knows himself/herself better than anyone else. No one is forced to do or to say anything. The therapist is not the expert who exercises obvious or latent power over the people (s)he treats. The therapist is practically each person’s animator on his/her path to self-knowledge and self-acceptance.

The concept of non-directiveness provides ample space so that people discover various aspects of themselves. In this method, the therapist listens to each person with empathy and acceptance, encouraging him/her to trust what (s)he feels and expresses. Apart from that, the therapist, through his/her suggestions, offers people ways to try, to express and to externalise their ideas, desires and thoughts. People are completely free to accept to work on the basis of these suggestions or not. There isn’t any kind of enforcement.

The experiential process of expression and trial gradually changes people and transforms them into individuals with desires, informed choices, emotional wealth which is expressed to others, self-knowledge and acceptance, as well as awareness of their position in the society. Each person who has these characteristics is free from any psychic and psychological disorders.